Review of AGONY OF BEING ME by Victoria Valentine – 4 Stars 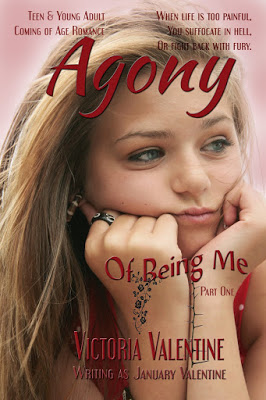 A touching and heartbreaking coming of age drama told from the point of view of the two main characters, Agony Of Being Me is not always an easy read. Zoe Channing is a promising student who writes songs and plays the guitar. Jesse is a popular boy, who could have any girl he wanted. Whilst working on the school play together, chemistry starts to grow between shy, studious Zoe, and Jesse, who is looking for something different in a girl.

However, before their romance can get off the ground, Zoe’s life is turned upside down when she becomes the victim of a horrifying sexual attack. Ashamed, terrified and convinced her attacker will track her down, Zoe has no idea what to do or who to turn to. Meanwhile, Jesse has his own problems. Since his mother passed away and his father fell ill, he and his reckless older brother Jamie have been running the family garage business. Jaime causes him nothing but trouble, as do the girls he so regularly casts off.

Despite the drama in his own life, Jesse cannot get Zoe out of his head, and when he bumps into her at a party, he finally makes his move and lets her know how special he thinks she is. As the story is narrated by both characters, the reader is always painfully aware of how much each teen likes the other, but life and circumstances just keep getting in the way. The author expertly uses first person narration to draw the reader into the minds of these teens and their tumultuous lives. It makes for a bumpy, emotional ride, but you become so entwined and involved, that you do not want to get off until you know that everything is going to be okay for them. After the party ends in tears and chaos, tragic Zoe’s life takes another dramatic turn for the worse. Convinced their romance is over before it ever got a chance to start, Jesse loses himself in other girls, but Zoe is never far from his mind.

Zoe is an interesting character, who goes on quite a journey in this book, which is part one in the two book series. I found myself totally absorbed in her life and her thoughts and was rooting for her at every stage. The narrative voice used for both teens was very convincing. It reads almost like diary form at times, with interior monolog letting us in on their deepest, darkest fears and emotions. As they both stagger from drama to drama, you feel you want to step in and offer a guiding hand, which I think is a testament to the strength of the characterisation. An edgy, hard-hitting and emotional read which expertly captures the young adult voice, I am looking forward to reading the next installment in this story and would recommend this book to anyone who enjoys character driven contemporary drama or young adult romance with a gritty edge.

A gritty and hard-hitting exploration in young adult voice and characterisation. Not for the faint hearted, strong issues are dealt with and experienced from the teenager’s points of view, and the narrative voice is excellent.

Water Forest Press Books : 12.99
Amazon e-book: $2.99
Amazon hard copy: $15.99
Visit the Official Website
Find it on Goodreads
Like it on Facebook
More about Agony of Being Me on UBR


Read Agony of Being Me