Review of Angel of Song by Anne Rouen 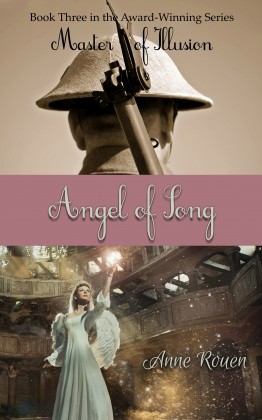 It’s 1913, and 17 year-old debutante Angelique de Villefontaine lives a sheltered life even though she is the star soprano of Opera Magigue of Paris. When her guardian the marquis du Bois agrees to tell Angelique her Godmama’s story, she is bombarded with harsh realities – from the idea that a different set of rules apply to those in power to the horrific notion that asset matches trump love in the noble class. These undercurrents make Angelique aware of the complex relationships surrounding her, and set the stage for the tides of confusion and loss that swell ever-swiftly as World War I draws near.

Appreciation for her talent and beauty crescendos, and the cadence of Angelique’s life accelerates. Soon her mentors can no longer shield her from the lure of the limelight. As the marquis du Bois fervently works behind the scenes to fortify Paris for the battles on the horizon, Angelique is unaware of his efforts and focuses on her career and the tour that promises to make her notoriety surge to new heights.

When an assassination highjacks her plans, Angelique’s life is turned upside down. Traumatized by all she has felt and observed, and still in the dark about her mentor’s role in her current reality, she discovers that helping the wounded is a salve for staying sane. During these dark days, Angelique learns about love and the power of letting go. She also becomes known as the embodiment of her name, an angel whose voice soothes the wounded and inspires troops.

As the Allies struggle to defeat their ruthless enemy, will Angelique’s voice become the secret weapon they’ve been searching for?

The third tale in Anna Rouen’s MASTER OF ILLUSION series can also stand alone, and for readers drawn to historical fiction, intrigue and romance, ANGEL OF SONG is a novel hat trick. Rouen weaves many layers into the fabric of the story — from Angelique’s journey of self-discovery and the complexities of love and loss to the chaos of war and the transformative power of music. While a bit slow at times, ANGEL OF SONG’s well-developed plot and rich character relationships will keep readers turning pages with anticipation.