Review of Falling in Death and Love by Magnus Stanke 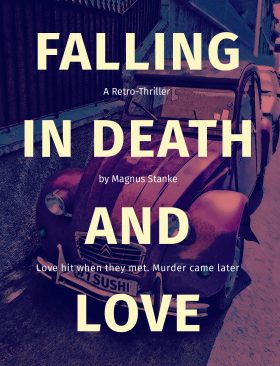 David falls hard for Aurora and vice versa, but the holiday is over. When she returns to Mallorca she isn’t alone, the deadly chase already underway: first it’s the hitmen and then the police.

The action does not let up as author Magnus Stanke puts the reader into the heads of David and Aurora, our hero and heroine, as well as the crooked bad cop; the coldly professional gunman and his hapless sidekick; the junkie informant couple who will do anything to get out from under the thumb of The Man; and even the half-blind old man in the Mallorcan forest who nearly takes out our hero, mistaking him for a deer.

Falling in Death and Love is a hard-boiled, heartfelt thriller, a breathless ride through times of change. Love, guilt, paternity, murder – probably not in that order.

Stanke’s wildly thrilling period piece captures not just the groovy vibe of post-Franco Spain in 1977, but also the feel, the look, the smell, of Mallorca just as tourism was starting to really make inroads into the formerly pristine island.

His unusual and ambitious jumps in point of view wouldn’t have worked in the hands of a less skilled author, but here you’re in good hands. David and Aurora’s whirlwind courtship is over almost before it began, and then, upon her return to him three months later (surprise! With a child in tow) the breathless chase through the pine forests and over the mountains unwinds skillfully. David and his young charge flee for their lives from hit men, and then murderous cops. Then Stanke rewinds and adds another perspective, layering on a new level of understanding for the reader. And again he backs up and goes over the same ground again but in the head of yet another character. By the end, when the whole heart-squeezing narrative has unfolded, the reader knows everything and is satisfied. It’s not an entirely happy ending, you know that going in—but it’s a just one, and a thrill right to the last scene.

I wholeheartedly recommend Falling in Death and Love, for anyone who enjoys and appreciates intricate plotting, who has an affinity for Spain, or who needs a reason to stay up late. Once you start this novel, you won’t want to stop.

Amazon e-book: $2.99
Find it on Goodreads
Like it on Facebook
More about Falling in Death and Love on UBR

Stanke’s wildly thrilling period piece captures not just the groovy vibe of post-Franco Spain in 1977, but also the feel, the look, the smell, of Mallorca just as tourism was starting to really make inroads into the formerly pristine island.


Read Falling in Death and Love