Review of QUEST FOR THE HOLY SNAIL by Rob Johnson 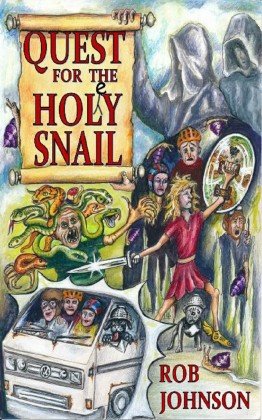 Horace Tweed, a hapless adventurer with a time-travel machine, places an ad in search of “gainful employment.” When he receives a reply, he’s drawn into a slapstick search through time and space for an extinct snail that can confer eternal youth. He’s joined in his quest by his dog Zoot; Norwood Junction, a stranger in the wrong place at the right moment; and Vesta Swann, their employer’s niece.

Meanwhile, a string of murders is taking place, all the victims killed on their 70th birthdays. The only clue: the killer wore a monk’s robe and Union Jack flip-flops. While examining one of the victims, Detective Chief Inspector Harper Collins and her inept partner, Sergeant Scatterthwaite, discover a snail next to the body and another shoved down the corpse’s throat.

The writing in Quest for the Holy Snail shows the author is a talented wordsmith with a penchant for Monty Python-esque humor. But, unlike with Terry Gilliam’s writing, the slapstick verbal calisthenics detract from rather than enhance the story. Particularly in the opening, where the funny-the-first time quips lose their humor when strung together too often and too close. Instead of entertaining, it comes across as the author jumping up and down, waving and screaming, “Look at me! Look what I just did there. Isn’t that funny?” interfering with the plot and characters’ development. Of the cast, only Harper Collins comes across as a person instead of the set up for a joke. The others are one-dimensional and similar enough to be interchangeable. Had any of them been killed by the mad monks, Gorgons, or through a terrible time travel mishap, they wouldn’t be missed.

The author intrusion does tone down after about five or six chapters, and the storytelling ability of the author starts to show, particularly in the chapters following the detectives’ investigation. Events start to set up building expectation of a grand finale that pulls it all together. But, that never happens. Instead, the ending wraps up quickly and incompletely, leaving plot holes and loose threads, none of which are intriguing enough to warrant reading a sequel.

Quest for the Holey Snail has some potential to be a fun and entertaining story, but instead it becomes a skit that extends well past its time, with an ending plot hole big enough to drive Horace’s old VW camper van through.

Monty Python fans may enjoy the slap stick humor and occasionally creative wordplay that make for some chuckle-worthy moments in Quest for the Holey Snail. Overall, the writing is excellent. Too often, though, the verbal calisthenics take over the story, detracting from plot, characters, and humor, and draw attention to the author’s presence. That makes it hard to become vested in the story or any of the characters. The murder mystery storyline is interesting and hints at a would-be great finale, but instead, the ending wraps up quickly, leaving the reader unsatisfied.


Read Quest for the Holey Snail