Review of RED LINE: THE SHIFT by J. T. Bishop 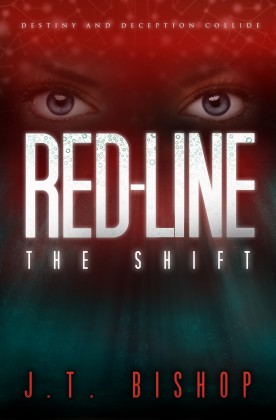 Red-Line: The Shift is the first book in a sci-fi trilogy about a group of aliens living on Earth. It’s a competent, well written and interesting story, which could also be described as a romance, due to the relationship that develops between the two main characters.

On first appearance, Sarah Randolph seems to be an ordinary young lady. She works in a book store, where her well meaning co-worker Rachel attempts to encourage her to come out of her shell. When John Ramsey walks into the store one day and shows an interest in Sarah, it would seem Rachel has found the perfect opportunity to encourage her quiet friend to live a little. But all is not as it seems. There is something wrong with Sarah; she’s not been sleeping and just doesn’t feel herself. And John Ramsey claims to know why this is. After saving her from an unusual abduction, Ramsey explains that he has been assigned as her ‘protector’. It is his job to break some astounding news to her and help her through the journey she is about to embark on.

It turns out Sarah is not human. Like Ramsey, she is Eudoran. The Eudorans are peaceful extra-terrestrials who have been living on earth for generations. The first third of the book introduces the characters as well as Ramsey’s unique dilemma He is supposed to protect and aid Sarah while she goes through her ‘shift’; a physical event all Eudorans must endure in order to realize their full powers and sensitivities.  However, he’s not been told the whole story. As one of only two surviving ‘red-lines’, Sarah is more unique than he realizes. Even more confusingly, the rarity of her existence threatens them all, but could also be the one thing to save them from certain death. The second third of the story deals with Sarah’s shift. Drifting in and out of consciousness, Sarah, whose life has been turned upside down by the knowledge that she is not human, has no choice but to go through the extreme physical ordeal with a group of strangers assigned to help her. As a reader, you can’t help wondering who she can trust.

The last third of the book reveals some more surprises, hints at more revelations to come in Volume Two, and sees the smoldering attraction between Ramsey and Sarah grow into something more. It also provides a dramatic climax as Sarah comes through her shift and realizes her unique powers and her responsibility to save the gray-lines. The author does well to spread the information about the Eudorans throughout the book, without dumping too much information or fact on the reader at once. The readers interest is held and the characters are believable. I particularly enjoyed the competitive nature of the relationship between Ramsey and his step-brother Declan. The sub plots and the future ones hinted at keep you turning the pages. By the end of the book we understand why Sarah is so rare and so precious to the gray lines, but we do not know exactly who she is in danger from or why. The book ends leaving  enough hanging in the air to make you want to read book two, where I presume further questions will be answered and raised. The only downside for me was the omniscient third person narrative, which saw several character points of view within a chapter. I felt this caused me to feel slightly disconnected to the characters, but I am hoping they will continue to develop as individuals in the next two books. Overall, an enjoyable and unique book with the sort of extra-terrestrial story line you can imagine making a very good movie.

A competent, well written and interesting alien adventure, with a hint of romance, Red-Line: The Shift holds your interest from start to finish. Who is watching Sarah Randolph and what do they want with her? Why hasn’t she felt like herself lately, or been able to sleep? John Ramsey has the answers, or at least some of them, but can she trust him? The action starts quickly, with Sarah going through the ‘shift’ just moments after being told she is not in fact human. The story then confines us to one house and one group of characters as they aid and protect Sarah through her shift, whilst using their own unique sensitivities to divert and fight danger as it appears. Sarah is a ‘red-line’ Eudoran, possibly the last of her kind and the only hope the gray-line Eudorans have of survival…but there is another force at work, and who they are and why they want to get hold of Sarah will no doubt be revealed in Volume Two.

Amazon e-book: $2.99
Amazon hard copy: $13.95
Visit the Official Website
Find it on Goodreads
Like it on Facebook
More about Red-Line: The Shift (Volume One) on UBR


Read Red-Line: The Shift (Volume One)