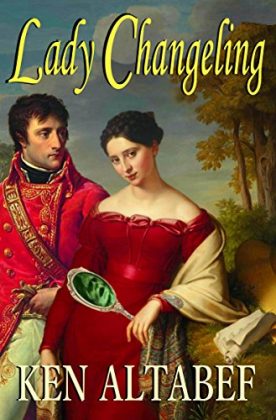 Set in England of the 1870’s, this alternate history world includes fairies and other types of magical creatures. By the time our story begins, it appears only the fae and humans still exist, and those not without their troubles. Theodora is an undercover agent for the Summer Court of the Fair Folk, using unusually strong glamour to present as human to the man she’s been sent to seduce Lord Eric Grayson.

In the course of a decade, Theodora has used her position as Lady Grayson to search for a device that can kill or destroy any magical creature on the grounds where the device was last seen. The end of the world, of course, is now nigh and she must find this “silvered lens” device to save humans and fae alike from a creature of pure chaos.

Things are complicated when her husband, Lord Grayson, begins to suspect his wife, a recently captured prisoner escapes, and Theodora is seen dancing with the fairies in the moonlight.

I really liked this book and the universe it’s set in. The whole thing reads likes the perfect Historical Urban Fantasy.

I read it swiftly, carried it to bed, never left it behind in a restaurant, and general kept it with me until it was finished.

I was really impressed with the characters of Eric and Theodora, especially the richness and drama of Eric’s past as it became part of the story. I enjoyed his internal struggle as he tried to fight against loving his wife upon discovering secret after betrayal after secret. I loved his interactions with his man, March.

Theodora was impressive, too, attempting to stay true to both her mission and her love for Eric and the children. Steadiness and forthrightness isn’t a trait one expects in a fae. Indeed, Lady Changeling seemed as surprised at her deep love as her fairy friends thought she’d fallen for her own illusions.

The only negative was perhaps the dialogue and Eric’s attitudes seemed a little too modern. There was little in anyone’s speech that spoke to me of the late 19th century, but I would much rather have modern slang and American spellings than an overworked attempt to create the proper English of the period.

Otherwise, I look forward to returning to this universe. I see that there’s a sequel: Changelings at Court. It’ll be part of my next buying spree, assuming my wife doesn’t buy it for me first.

For readers who liked these books and authors: A Charm of Magpies, Changling: The Dreaming, Jonathon Strange and Mr. Norrell