Underground Title Debut: Release of THE UN-FAMILIAR: A Tale of Cats and Gods 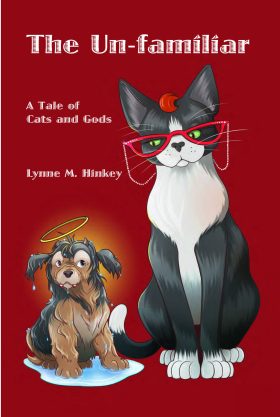 More about Underground Title Debut: Release of THE UN-FAMILIAR: A Tale of Cats and Gods on UBR

I'm pleased to announce that my latest novel, The Un-Familiar: A Tale of Cats and Gods, was released by Casperian Books on Friday, July 1.

In The Un-Familiar, science, magic, and myth collide when the chupacabra returns to Puerto Rico in a mad-capped, fast-paced chase around the island. The Un-Familiar is the second in The Chupacabra Trilogy (the final installment, Ye Goddess! A Tale of Girls and Gods, is in development.) Although this is a sequel, I wrote it with the intent that it could also stand alone for readers who haven't yet read Ye Gods! A Tale of Dogs and Demons (also from Casperian Books). As Katie Pryal wrote in her recent announcement on the release of Chasing Chaos (congratulations, Katie!), yes, "that's totally a thing."

In the nine days leading up to the release on day 10 (so June 22-30), I posted interviews with various characters from the book on my blog and Facebook page as a way to garner interest and introduce/reintroduce the characters and world to readers. If you'd like to get to know more about the chupacabra and the rest of the zany cast of characters, stop by and check them out. I also have a list of promotions, book signings, and other events posted on my website.

From the back cover of The Un-Familiar: A Tale of Cats and Gods

There's a beast of a storm brewing and only a god can stop it.

Señora Milagros, familiar to the dog-god of Mercy, sometimes called the chupacabra, is ready to retire but her apprentice, Carmen del Toro is missing. Before she can curl up and enjoy her new retirement life as Fifi, Milagros will have find and unite Carmen and the god.

Milagros knows the god is like a vortex, pulling people in to the events they must be part of, to fulfill a purpose that only He knows. With natural disasters occurring in a most unnatural manner, she suspects there's a connection behind Puerto Rico's unusual weather, Carmen's disappearance, and the god's bigger plan.

Without his familiar, the god will remain weak and vulnerable to predation by other deities. Milagros needs to find and unite Carmen and the god before it's too late. It's not only her retirement at stake, but the entire world's future.