Review of Daydreams and Devils by Robert Cowan 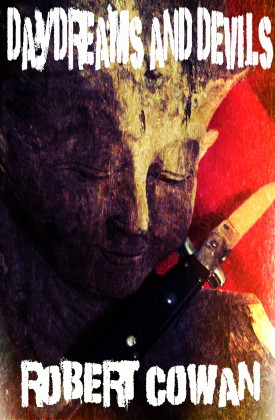 On the surface this is a gritty, action packed crime thriller, full of colorful characters, brilliant dialogue and dark humor. A tale of gangsters, violence, clubs, drugs and women. However, it is actually a lot more than that, with an equally riveting and at times, very touching, coming-of-age style story line running adjacent to the gangster one. In the first few chapters we are introduced, one by one, to the main characters. Vincent, is the boss of a criminal gang, who is taking over local businesses one by one. Frankie is his knuckle headed, devoted and psychotically violent henchman. Johnny is a younger employee in the process of climbing up the gangster ranks. James is a young man who has just left education, and decided to start a band. It was his story which really drew me into the book, and made it one I was very reluctant to put down. James is a huge music fan, (and from the amount of fantastic musical references which fill this book, I can assume the author is too) a talented singer, and about to become the front man of Strangeways, a band he hastily throws together with the three lads who answer his ad. For the majority of this novel, the two story lines run alongside each other. One moment you are chilled by the disturbing and extreme violence Vincent and Frankie subject their rivals to, and in the next breath you are warmed and touched by the somewhat innocent and poignant beginnings of the boys band. The author does a great job of moving between the two worlds, whilst expertly building up the pace and tension, as you try to predict when and how they will collide. I very much liked the character of James. He came across as a bit uptight and serious at times, but was also a boy on a mission to fulfill his dream, whilst proving his unsupportive dad wrong. I enjoyed the humor and authenticity of the bandmates rehearsals, attempts at song-writing and the descriptions of their first gigs. The ending of this book was handled very well. The character’s lives become inevitably entwined, and the tension builds, and you desperately, desperately want the good guys to win! It had a particularly satisfying ending which left me smiling, and I would certainly like to read more from this author.

This book will appeal to readers who enjoy gangsters and crime thrillers, as well as dark humor. It does, however, have a lot more to offer than that. There are unique and believable characters, and two intriguing story lines which keep you hooked and guessing as to when they are going to tangle. Anyone who enjoys coming-of-age style stories would also enjoy this book, not to mention anyone who thinks of themselves as a music fan. Also for fans of very British books/films. It is described as Goodfellas meets The Commitments, but felt more like Lock Stock and Two Smoking Barrels meets The Commitments.

For readers who liked these books and authors: Irvine Welsh, Roddy Doyle, The Commitments