Review of THE LAST DETECTIVE by Brian Cohn 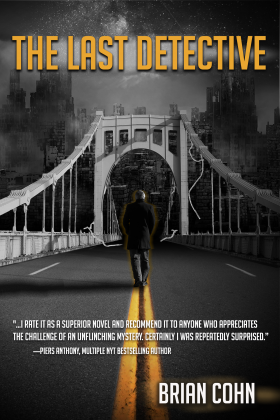 Adrian Grace is–or was–a homicide detective, and a good one. But that was prior to the invasion of the aliens known as “the slicks.” Cut off from his family during the takeover, Grace has spent the two years since the conquest living in a squalid motel room on the outskirts of the city, laying low to avoid being rounded up and sent to the unknown fate of a labor camp. When he receives a middle of the night summons from “the Authority”–the human-staffed agency that manages human affairs for the slicks– the suggestion of a reunion with his wife and daughter draws Grace into the murder investigation.

The more he digs, the more clues and conspiracies he uncovers, from backstabbing and colluding politicians, to subversive acts of rebellion. Each time he thinks he’s onto the answer, he ends up with more questions, but are any of them related to the murder?

The Last Detective has the fast-paced, introspective style of a hard-boiled detective novel. The complex, but never contrived, murder mystery will keep readers guessing to the end since almost every one of the well-drawn multi-dimensional characters have motive. The entire story unfolds in a post-apocalyptic city scattered with familiar landmarks and once comfortable places turned shoddy and dark, like the inhabitants themselves. The masterfully rendered setting holds a sense of threat and impending doom, and draws the reader in so thoroughly that it can be jarring to look up and see the world back in order.

If you’re looking for a cozy mystery, this isn’t it. The violence isn’t gratuitous, but some is graphic. Mystery readers who might hesitate because of the sci-fi aspect–don’t. Cohn has seamlessly woven the alien invasion aspects into the mystery to form a comprehensive whole where both parts feel essential. Similarly, all of the characters are essential, and although each is uniquely drawn, some of their appearances are either spread out or initially so minor that when they later come front and center, it’s difficult to remember who they are. Keep reading, though, and there are enough details sprinkled in to work it out without having to reread previous references to identify them.

The superb writing and editing (the few errors stand out because of their paucity), and complex plotting of The Last Detective make it a great read for anyone who enjoys an exciting who-done-it.

Whether you’re a fan of sci-fi fan, hard-boiled detective stories, or mysteries, this book will appeal to you. Yes, it crosses genre lines, but in such a seamless manner and with such elegant prose, even purists of any one of those genres will be satisfied. But, don’t grab this if you’re looking for a cozy mystery. The violence isn’t gratuitous but some of it is graphic. The superb writing and editing (the few errors stand out because of their paucity), and complex plotting of The Last Detective make it a great read for anyone who enjoys an exciting who-done-it.

Barnes and Noble : 15.99
Amazon e-book: $4.99
Amazon hard copy: $15.99
Visit the Official Website
Find it on Goodreads
Like it on Facebook
More about The Last Detective on UBR