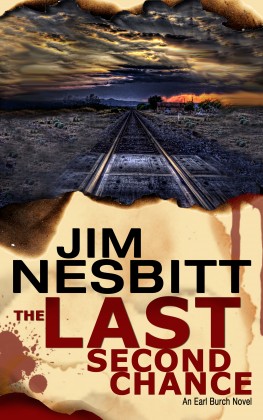 Dallas detective Ed Earl Burch (Burch) is enjoying a favorite Mexican dish when a small stature woman, namely Carla Sue Cantrell, points a large .45 caliber gun right at him. Carla drops the name of Teddy Roy Bonafacio (T-Roy) and immediately Burch conjures up a flurry of memories, many of which are disturbing. Indeed, Teddy is nothing but bad news. Carla leads Burch over to the estate of the infamous Neville Ross, T-Roy’s previous boss. Bent on revenge, Neville intends to use Burch to scout out T-Roy’s whereabouts and gun him down.

Neville never gets to execute his diabolical plan when a “whooshing rush of flame” enters the room and consumes him. Carla and Burch hightail out of Ross’ place with one goal in mind: to get T-Roy. Heading to Mexico to locate T-Roy, Carla and Burch gear up for their trip. Yet en route others are hot on their trail since Burch has been accused of murdering a woman. Obviously, Carla and Burch have no idea of this accusation let alone how they’ll deal with unexpected situations that will meet them around the bend. While trouble seems to stick to them like glue, time will only tell if they’ll be equipped to deal with T-Coy.

Jim Nesbitt’s debut read is one rollicking adventure into a world of violence, gore, and all things sexual. Nesbitt’s narrative—wrapped up in crass and crude lingo—features Burch, an ex-cop with a history replete with unresolved conflict. While keeping Burch front and center, Nesbitt introduces an array of colorful characters (supporting, foils) that play important parts in the storyline and cast development. Chapters alternate between the present, the past (memories), and Nesbitt’s cast, and often close with cliffhanging endings. There’s no banality to be had in Nesbitt’s plot. Scenes suddenly shift out of nowhere, yet all come together to create one heck of a page-turner. Nesbitt should be considered a rising author of dark comedy. Kudos to Nesbitt for producing a well written and absurdly entertaining first read!

The first book in the Ed Earl Burch series, The Last Second Chance isn’t for everyone. Audiences who get a thrill out of Quentin Tarentino’s flicks will no doubt find Nesbitt’s plot captivating from beginning to end.